Determination, Coolidge, and My Publishing Career 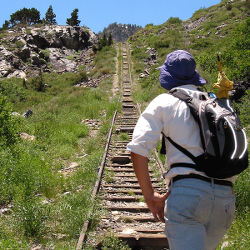 It is finally the last day of 2017. And what is on my mind? Something my father had posted in his home office:

"Nothing in this world can take the place of persistence. Talent will not: nothing is more common than unsuccessful men with talent. Genius will not; unrewarded genius is almost a proverb. Education will not: the world is full of educated derelicts. Persistence and determination alone are omnipotent."

I don't think I've ever been so focused on leaving a specific year behind, as opposed to looking forward to the new one, as I am this time. Of course the completion of another orbit around the sun doesn't magically change things any more than the completion of another rotation on the planet's axis, but symbolically this particular calendar change matters a lot to me. Continue reading to see how this all relates to the quote shown above.

I knew going into 2017 that it would be a bad year. I wasn't wrong. I lost so much that was important to me in 2017, it is a year that will never feature fondly in my memories. Divorce, business closure, loss of having a stable place to call "home," failed book launches... While I can be happy for my kids and the milestones they achieved (and they did a lot!), finding my own positive events to look back on from this past year is vastly more difficult.

Often it might seem normal at the end of a bad year to look forward to the coming year, but that doesn't really make sense in my situation. There's nothing on my personal radar indicating that things will get better in 2018. I have to be realistic about the resources I have and those that I lack. I've never lacked motivation, for as long as I can remember, but usable resources have persistently come up shy. When I wanted to start an online marketplace (before Amazon or eBay existed), I didn't have the computer resources, nor the financial resources to acquire the technology, nor the family or social resources to muster up the financial resources.

Attitude is important, but a good attitude without the means to take action is nothing but nice thoughts. A person with serious physical disabilities, for example, can have powerful determination to overcome them—but if it's physically impossible to do so, then boundless determination will not overcome their personal obstacles. Success in any venture always comes down to resources. A positive attitude is an important resource, but it can't make the impossible magically possible. Grim stories abound of people strongly determined to beat cancer who died from it anyway. The determination probably made their last years better, and perhaps added years to their life, but it didn't cure the cancer.

While some things just aren't possible, others only seem impossible. Often the only way to tell the difference is by having that positive attitude, that determination to prove that something isn't impossible, and making a no-holds-barred effort to accomplish the "impossible." Some people do beat cancer, but only by making that effort. In a nutshell, that's where the Coolidge quote fits into my outlook for 2018.

As I look to the coming year, it wouldn't be sensible to assume that things will get better, or to believe that simply changing my attitude will also change the outcome from my efforts. However, it makes a lot of sense to reaffirm my determination to beat the odds and make my life better, and to resolve to persistently strive to find or make resources that I can leverage to finally match my motivation with achievements. The only way to find out whether turning things around now is as impossible as it seems is to make every effort to prove otherwise.

If you would like to help me prove it's not impossible to get things back in order, you can transform yourself into a resource to further my goals with just a few words. I would appreciate an introduction to anyone you think might be interested in a good story. Don't introduce them to me, or to my books directly, but to the characters in my books. If you mention Alex Nabihr (Journey to Yandol, and other stories) or Bunierti Kittran (Wolf Block) or Birkran Kinru (KINRU) or Dan Starney (Lesson One: Revolution!), you might intrigue them enough to seek out my writings. If you're not keen enough on any of my current characters to do that, I plan to introduce many more in 2018! (Find out when new works are released.)

I hope that 2018 is a peaceful year for all and, for those like me who are saying an eager farewell to 2017, I hope the new year brings new happiness!

Photo by Allen Conant (aconant on Morguefile.com), used under license.