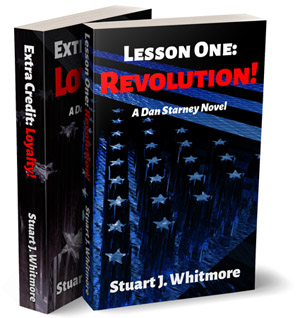 I could give you a pretty long list of the mistakes I made when I self-published my first novel, but in this blog post I want to focus on one specific area where I could (and should) have taken a completely different approach. If you're moving toward publishing your first book, you can learn from the mistakes I made and set yourself up for more success... or at least less grief. Certain things about publishing deserve great care the first time, because there won't be a second time.

As a relevant example, I can't start over with the books I have on the market under my own name. "Stuart J. Whitmore" will always have novels about Dan Starney, even if I were to decide to take those books off the market or re-release them under a new name. The existing ones are out there, and will always be out there (even if only as "out of print" listings). They will permanently act as a potential distraction or point of confusion for potential buyers as I try to focus my writings—and my audience—more on my "true loves" in writing, i.e., fantasy and science fiction.

Read on for three facets of managing your author identity now so that you can avoid causing problems for yourself later.

Many aspects of writing and publishing offer second (and third, and fourth) chances to get it right. A bad cover? Typos in the text? A glaring plot hole? You might regret these things, but they can be fixed for future readers. On the other hand, you really only get one chance at your identity and "brand" as yourself, using your own name. To put it differently, you get once chance at building a clear brand for each identity that you present to the public, and while you can have as many identities as you want (via pen names), there's only one you identity.

Therefore, branding of your "self" identity should be approached with much more caution and planning than many other things, including branding of pen-name identities. But I didn't know this when I started; I didn't even think about it. I was just excited to have one of my novels out there where anybody could buy it. I also had the misguided notion that my first book might be my only book. (Don't think that about your first book. Perhaps I'll explain more in a later blog post.)

To help you hone your identity, whether under your own name or a pen name, consider these three facets of your brand as an author:

1. Your name. Obviously, an author's name is a huge part of their brand, and how readers associate books with an author and find more from authors they like. I don't need any fancy colors, artwork, or other "branding" elements to help you identify the works of writers such as J.R.R. Tolkien, J. K. Rowling, Robert A. Heinlein, and George R. R. Martin. But not all names are created equally. Length and position in the alphabet can matter. Length will affect cover design; alphabet position can, in some cases, affect visibility. When I've worked on my own covers, the length of "Stuart J. Whitmore" has been, shall we say, annoying. With initials near the end of the alphabet, my own name isn't doing me a lot of favors. There are things I could have done differently... but I wasn't thinking about that.

2. Your genre(s). It's not hard to find debates among indie authors about whether it is "okay" or "career suicide" to write in multiple genres or nonfiction topics all within one author identity. I thought it might be "okay." Now I'm at the other end of the spectrum. If you're leaning toward a chaotic mix of genres and topics, take a long, close look at authors you look up to. What does their genre selection look like? Do you want to have success like them? Will making choices that are opposite of theirs take you in that direction?

3. Your online presence / personality. I'm not saying you must have one, but if you do, you should question whether your online activities will help or hurt your efforts to build your audience. By the time I released my first novel, I had been building an online presence for nearly fifteen years (and I'd been part of online communities for nearly twice that). It felt natural for me to set up my book information along with everything else I had accumulated... but this was not going to help me sell books at all. I finally created a book-focused site, StuartWhitmoreAuthor.com, just to have one non-cluttered, non-distracting place online where readers could find my books and my contact information. Nothing about photography, or computers, or hiking. Just my books, presented to potential readers. This blog is not there, because—as this post shows—posts here are often written to/for other writers.

Honestly, I regret not using a pen name for my first novel. The genre is substantially different from what I'd written before and what I normally write now, and having that book and its sequel in the mix does not help. If you're moving toward publishing your first book, I would strongly suggest using a pen name. If your book takes off, great, you can keep going with that name, and that will be your public identity, much like Robert Jordan or Piers Anthony (James Oliver Rigney, Jr. and Piers Anthony Dillingham Jacob). But if it doesn't live up to your dreams, even after giving it your best effort? You can cast it adrift, collect a few occasional royalty payments, and try something new with a fresh name.

You might be wondering why I don't start a new pen name now for my fantasy works (since I have none published yet) and my science fiction works (of which I've only published short works like Wolf Block). Well, I might. It would be one way to save those future titles from the mess I've made under my own, full name. It would also allow me to choose a name that is easier to fit on covers, and higher in the alphabet.

But all things considered, I would rather have my real name associated with those works, and pen names for anything else. But it's too late. I can't go back and arrange things that way. If you haven't published anything yet, you still have time to learn from my mistake and make a very deliberate decision about your identity, rather than stumbling through things as I did.